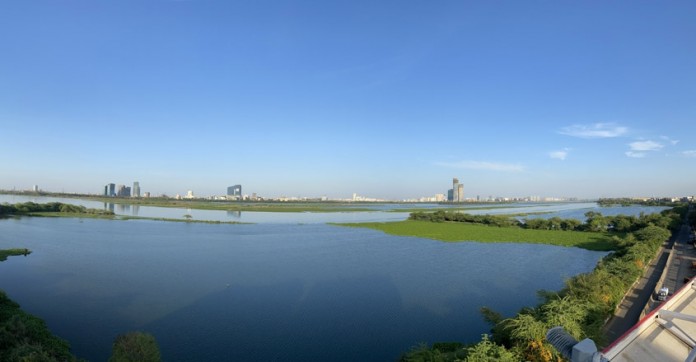 Even after spending almost two thousand crores rupees and making huge plans, the Central and Delhi governments did not capable of clear the Yamuna in 25 years. But due to the lockdown implemented due to the Coraena virus infection, the Yamuna in Delhi has cleared up to 60 percent. In 12 days from Palla till the first Wazirabad barrage and from Signature Bridge to Okhla barrage, the water has become as clear as glass. If you leave Najafgarh and Burai bypass in front of the Wazirabad Navgaja Pir, there is no dirty water anywhere from Palla to Okhla Barrage.

Industries are closed during lockdown, this has stopped the flow of chemical-rich sewage from Najafgarh, Burari bypass and Shahdara drain to Yamuna river.

There are two major reasons for Yamuna’s plight. One is Najafgarh and Burari bypass drain and the other is Shahdara. More than half of the dirty water of unauthorized colonies of Delhi falls into the Yamuna. There are also 22 tributaries associated with the Yamuna in Delhi. Rain water flowed from them into the river. Now DJB is using these sources as drain for drainage from unauthorized colonies.

Advocate Siddhartha Mishra - April 29, 2020
0
While dealing with the question of child custody laws in India sometimes it comes on my path to choose between what way or law...

Rajasthan HC orders that permission will be taken to change religion

Vkeel Team - December 16, 2017
0
The Rajasthan High Court has issued an important verdict on Friday. The High Court said that now for the change of religion, permission from...

Vkeel Team - October 27, 2017
0
The Supreme Court has raised the question of non-availability of creamy layers in Scheduled Castes and Scheduled Tribes (SC/ST) Reservation. The court asked whether...

Vkeel Team - July 4, 2017
0
The GST has shown that the work which can not be done by all the government's incentive schemes. Within a few days of the...
Lawyers in India
Lawyers by Laws
Lawyers by Category
WP2Social Auto Publish Powered By : XYZScripts.com